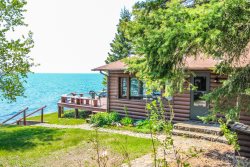 If you’re walking along the shore of Agate Bay in Two Harbors near the lighthouse, you might stumble upon something strange: A set of railroad tracks that begin at the edge of the water and lead into the harbor. It’s a strange sight that will immediately make you wonder about the history of the tracks and why they lead into the water.

No, there is not an underwater train that you can ride. Instead this set of tracks once served the booming commercial fishing village of Agate Bay, and now it sits eerily disappearing into the depths of Lake Superior. The tracks were used to transport boats to and from the water and led into a boathouse that sat in the middle of the Scandinavian fishing village.

The sea lampreys latch onto fish such as lake trout and whitefish and live off of their blood and bodily fluids. A lamprey kills approximately 40 pounds of fish throughout its life time and grows up to 20 inches long, giving it a slimy eel-like appearance.

Since the invasion, biologists have been able to deplete the sea lamprey populations by 90% throughout the Great Lakes by securing the canals that they once traveled freely through.

The Great Lakes fisheries are alive again, valued around 4.5 billion dollars per year. However, the Agate Bay fishing village has not made a comeback. Regardless, the village played a large role in the rise of the fishing industry on the great lakes.

Though little is left to remind visitors of the vibrant fishing village that existed many years ago, it’s an important piece of history that many people take pride in keeping alive.

Getting There
Travel 25 miles north of Duluth on Hwy 61 to Two Harbors, take a right onto Park Rd and continue for 1.1 miles. Park in the parking lot and begin following the paved walking trail to the north (the opposite direction of the lighthouse). The railroad tracks and a marker will be on the left side of the trail.