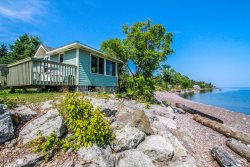 When most people think of Gooseberry Falls State Park, they think of the well-known falls that reside within the park. Though the falls are incredibly beautiful, they also undermine another gem in the park: Agate Beach.

Agate Beach is found at the mouth of the Gooseberry River where the water from the river meets Lake Superior. As its name suggests, the beach is a great spot for searching for prized Lake Superior Agates.

One of the most interesting things about the mouth of the river is its ever-changing beach and sandbar. Each season affects the formation differently. Melting snow in the spring results in a heavy flow of forceful water rushing down the river, wiping out the sandbar. Calmer summer weather builds up the sandbar and fall’s powerful storms and winter’s beautiful ice formations shift the rocks even more. Since the beach is constantly transforming, you’ll likely feel like you’re on a new beach each time you visit.

After you’ve spent time at the beach, be sure to check out the Belle P. Cross anchor nearby and the Picnic Flow, a bed of ancient rock formed by lava over a billion years ago. Log and stone picnic tables built by the Civilian Conservation Corps are available for visitor use.

Getting There
To get to the beach, drive to Gooseberry Falls State Park (about 13 miles north of Two Harbors on MN-61). Take a right (toward Lake Superior) into the park and follow the signs to the lakeshore parking area. After parking, follow the trails from the parking lot to the mouth of the Gooseberry River.