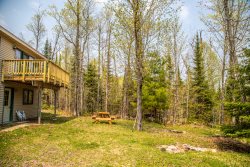 When you think Minnesota, “wildcat” does not usually come to mind. However, the bobcat is the most common wildcat in North America, and lives in the woods on the North Shore! The bobcat is a medium-sized cat that has shades of beige and brown fur, with distinct spotted markings, and a short bobbed tail, from which it gets its name. The bobcat is usually confused with its bigger cousin, the lynx, however the biggest difference between the two animals is their size and a white tip on their short black tail. Approximately 725,000 to 1,020,000 bobcats remain in the wild, with 2,000 of them in northern Minnesota. Adult bobcats are 26-36 inches long and weigh about 25 pounds, making it roughly double the size of a typical house cat.

Habitat
Bobcats were once found throughout most of North America, but in the early 1900’s bobcat populations were decimated due to the increased value of its fur. Since, laws have been put into place protecting the cats, increasing the population significantly. Bobcat habitat varies from dense forest and mountains to semi-deserts and brush lands. The more dense the vegetation, the happier the bobcat, as they rely on keen eyesight and stealth-like movements to catch their prey. Bobcats are very territorial animals, with males generally controlling a 25-30 square mile area and females a 5-10 square mile area.

Reproduction
Bobcats mate in late winter and the gestation period takes about 10 weeks. The kittens are then born in the early spring, with each litter producing anywhere from one to six kittens. The kittens are usually born in a den, which can be a hollow tree, a cave, under dense shrubs, or any other place protected from the weather. As soon as the kittens are born, the female drives the male away and nurses the kittens for up to two months. Around the 5-month mark, the young bobcats learn to hunt in preparation for their mom’s territory eviction about three months later.

Food
Bobcats are a carnivorous feline, preying on only other animals to survive. They mainly hunt rabbits and hare, but will also eat deer, lamb and young pigs during the winter. An incredibly elusive predator, bobcats stalk their chosen prey silently in the dark and then with incredible speed, and force, they pounce. Along with being a predator, a bobcat is sometime also the prey. In Minnesota, up to five bobcats are able to be taken with legal firearms, bow and arrow, or trapping from the first Saturday following Thanksgiving to the Sunday nearest January 6. They are generally hunted for their fur which can sell for up to $400 per pelt, but they are also live trapped and placed elsewhere due to their aggressive nature toward pets.

Spotting One
Bobcats are very elusive animals and move around mostly at night. Their tracks are asymmetrical, and have 4 toes with a metacarpal pad that is “m” shaped. Most people do a lot of tracking in order to find one.