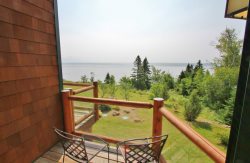 For years, there were rumors going around that the North Shore was stocked full of gold, copper, and silver which drew settlers from the east. After the second treaty of La Pointe in 1854, when most of the North Shore was ceded to the US Government, planning began for three new town sites along the shore. Although many of these sites never became more than ideas, one of the three that did was named Buchanan.

The plans for Buchanan’s construction were soon laid out and crews began working in late 1856. Before long, a boarding house, hotel, and several saloons popped up in the area and settlers began to swarm in. A dock was even added soon after the construction began to allow boats to come by water. Eventually, it became clear that the promised mineral abundance was not what it was expected to be and the financial crisis of 1858 crippled the town’s population. The town soon became the first ghost town on the North Shore.

Although the town itself no longer exists, a stone marker called the Buchanan Settlement Marker gives visitors the opportunity to feel like they are standing where something could have been. It indicates where the hotel, saloons, and dock lived many years ago. You can find it on Scenic Highway 61, about 1.5 miles south of Knife River.