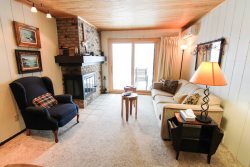 Caribou on the North Shore

Some time ago, caribou were roaming the North Shore, but were driven out. Over-hunting, logging, and the appearance of the white-tailed deer all took part in the disappearance of caribou in Minnesota, leaving behind only pictures and stories of those who had once seen them. These deer prefer mature pine forests in which to roam and once logging began in northern Minnesota, it quickly drove them out.

When the timber located in northern Minnesota was removed by loggers, young trees appeared, providing an ideal habitat for white-tailed deer. Why would this be a problem for caribou? Well, white-tailed deer are carriers of a parasitic ringworm, which is found in the deer’s brain. Although harmless to them, the parasite is deadly to caribou and moose. Over time, the population of caribou diminished and white-tailed deer took over the land.

Another factor in their disappearance was over-hunting as caribou were once a major source of meat and hides for the Native Americans and European settlers. No caribou were seen in Minnesota after 1935 until a few were spotted north of Grand Marais, most likely migrating from Canada. Wildlife experts predict that caribou will most likely never establish themselves in Minnesota again.