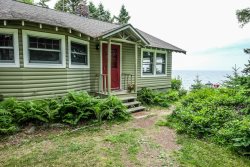 If you’ve ever seen one of these fascinating creatures, you are one of the few lucky people to have had that chance. The cross fox has a color that is similar to the red fox, but what sets it apart from the other species is its distinct long dark stripe that runs down its back, intersecting another stripe to form a cross over the shoulders. Although not as valuable as silver foxes, the coats from cross foxes were often traded among fur traders. The value of the pelt depended largely on how dark the pelt was. If it was a more pale color, it was less valuable.