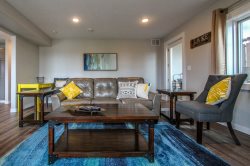 Cross River Falls is probably one of the easiest waterfalls to visit along the North Shore of Minnesota and is definitely worth the stop. Just southwest of the Temperance River State Park in Schroeder, these falls are part of a wayside park that is actually larger than the nearby state park. The falls are literally within feet of Highway 61 and can even be seen from the highway. The first set of falls are up along the Superior Hiking Trail, but the big portion of the falls is found at the wayside park.

The handy pedestrian bridges make for a great way to view the falls on both the north and south side. Just like any other waterfall, the best time to view them is in the spring or after a heavy rainfall when the river is rushing at an incredible rate. However, these falls are big enough that they even rush full speed during the summer and fall months, as well.

There’s a special present hidden from your sight when you’re standing on the bridge. If you walk to the other side of the road (toward Lake Superior), you’ll notice a trail that leads down to another portion of the river. From there you’ll be able to see the second drop of the falls at an amazing angle that most spectators often overlook. You may have to do some rock-hopping to get there, but the experience is worth it. You’ll even get a glimpse of Lake Superior through the trees!

Getting There
The Cross River Falls are found right in the town of Schroeder, Minnesota, along Highway 61.