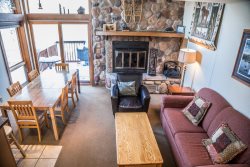 The Duluth and Iron Range Depot is a two-story, brick building that was built in Two Harbors in 1907. It is listed on the National Register of Historic Places and was the past headquarters and corporate office for the Duluth and Iron Range Railroad. The railroad played a major role in both passenger and freight service, while still meeting the needs of the area's lumber and iron mining operations until 1961.

Today the building houses a museum, the new Judge William Scott Library (a work in progress) and the Lake County Historical Society. The museum features exhibits that reflect the development of Lake County’s big three industries: iron mining and the railroad, timber, and commercial fishing. It maps out how the rail line was first used to transport workers and supplies to lumber camps north of Lake Vermilion.

On display are two steam locomotives of distinctive history to Two Harbors: The "3 Spot" which was built by Baldwin in Philadelphia for a Mexican railroad that never took delivery and a Mallet locomotive built by Swiss engineer, Anatole Mallet. The museum faces the harbor where more

then 10 million tons of iron ore are still shipped annually.