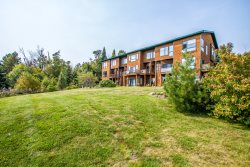 Built in 1896, the Edna G Tugboat was the last steam powered tugboat that operated on the Great Lakes. It sits at 110 feet long, with a 23 foot beam, and has a 1000 horsepower engine. The engine generates a bollard pull of a whopping 30 tons (bollard pull is the nautical equivalent of horsepower)! During its operation, the engine would use roughly 25 tons of coal per week, or 5 tons per day. That equates to about 12 shovels full of coal that had to be manually shoveled into the boiler every 10 minutes!

Named after Edna Greatsinger, the daughter of Jacob Greatsinger, the president of the D & IR Railroad in the early 1900’s, the tug served the Two Harbors shipping industry for decades. It also and had a brief stint in WW1 when it was moved to the east coast by the US government.

The boat ultimately had to retire in 1974 when it was designated as a National Historic Site. In 1981 it was donated to the city of Two Harbors. The boat is a very important part of the city’s heritage. If you drive through town today, you’ll notice that the boat appears on town signs and the city seal.

Today you’ll find the tugboat anchored in the harbor near the large iron ore loading docks. Though tours of the boat were given to visitors in the past, they have been suspended for the last few years for restoration work. The historical society hopes to secure funding to move the boat on land and resume tours in the future. If they don't find the funding, the damage that results from the boat sitting in the water year-round may cause the boat to sink.

In Two Harbors from Highway 61, proceed south (toward Lake Superior) on 6th St. to Waterfront Dr and you will see the boat in harbor.