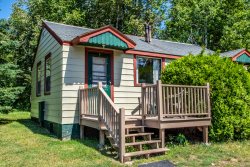 If you find yourself driving along the North Shore in need of a reprieve, the mouth of the French River is a great place to stop. Not only does it offer quick, easy access to Lake Superior’s shore, and an opportunity to dip your toes in the water on a hot day, it is also home to an adult fish trap used by the French River Cold Water Hatchery (FRCWH).

The trap is used to capture spawning fish (Chinook Salmon, Steelhead, Kamloops and Rainbow Trout) who are then brought indoor to the spawning facility upstream where they spawn and they are released. Though the eggs were historically spawned and hatched at the hatchery, the high costs of keeping the facility running year-round and concern about the disease has the eggs going to the Spire Valley Hatchery in Remer, MN to hatch. After the fish hatch, they are released into Lake Superior tributaries or are returned to FRCWH to grow larger (depending on the species).

Another interesting thing to note about the area: In 1855, the city of French River, or Clifton as it was referred to back then, was the first settlement town on the North Shore. People were drawn to the area by the projection of copper deposits, though later exploratory digs failed to locate anything profitable. In the 1880’s the area was also a hot-spot for the logging industry.

Getting to the Mouth of the French River
From Duluth, take MN-61 northeast out of Duluth for 12 miles. Turn right onto Ryan Road. Drive for .3 miles and turn left onto North Shore Drive. Drive .1 miles and park in the parking lot on the right.

From Two Harbors take MN-61 southwest for 14.3 miles. Turn left onto Ryan Road. Drive for .3 miles and turn left onto North Shore Drive. Drive .1 miles and park in the parking lot on the right.