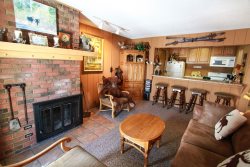 What looks just like a bunch of rocks in the middle of the water is actually one of Grand Marais’ best attractions! What spurred the development of the Breakwall and the Lighthouse you might ask? Well, in 1881 the Schooner Stranger wrecked just outside of the Grand Marais Harbor and all of the crewmen were killed. The people knew something had to be done to make it more safe.

In 1882, the development of the first breakwater and lighthouse began. The breakwall was to be stretched around 300 feet full of rocks of all sizes to protect vessels in search of shelter. It was completed in 1883, and during a storm the following year, eleven vessels sought shelter in the harbor with the protection of the breakwall. Take a walk out onto the breakwall and enjoy the breathtaking view of the Sawtooth Mountains in the background.

Getting There
When in Grand Marais, turn toward Lake Superior on Broadway Avenue. Park in the Coast Guard parking lot at the end of the road and walk south along the shore to the breakwall.