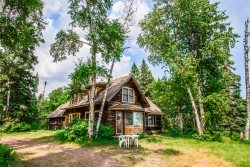 The lighthouse that sits in Grand Marais has become a destination for many visitors in the area. If you’ve been to Grand Marais, it’s likely you’ve walked along the breakwall to visit the square pyramidal structure, but do you know the history behind it?
The Grand Marais lighthouse was built in 1885 on the eastern end of the harbor breakwater. In the year or two prior, construction was completed on the piers that guarded the harbor entry. These new piers required a light and fog signal to guide mariners through the opening, so congress allotted just over $9,500 for a set to be installed. Charles E. L. B. David, who was the Eleventh District Engineer Captain at the time, created the construction plans that used surplus parts in order to reduce building costs.

In 1902 a second light was added to the west end of the harbor using a cast iron post with a small area for oil storage. After the lights were installed, many major repairs were made, especially to the original light on the east pier. Various lighting systems were used over the years until they were both automated in 1937. At that time, a light keeper was no longer needed.

Today, the lighthouse is managed by the Cook County Historical Society. The keeper’s dwelling, which was later built in 1896, still stands on the shore near the lighthouse and is currently being operated as a museum. The museum is open to the public during the summer months.
Check out this 360 video walk out to the Grand Marais Lighthouse along the breakwall. This is a 360 video so you can control which way the camera looks by clicking on the video, holding down, and moving the view around. Enjoy!