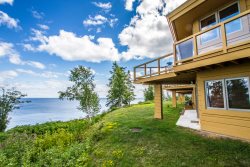 We know where and we know how, but the when is a mystery.  However, soon, the North Shore will witness a historic moment that you may be lucky enough to catch, if you happen to be in the right place at the right time.

For the first time in over 30 years since she was moored in the Duluth Harbor, the SS William A. Irvin will once again sail the Great Lakes.  Sort of.  The move, which will likely happen in the pre-dawn hours on an undetermined day in the near future, is a tricky one that is estimated to cost the City of Duluth upwards of $800,000.  The ship will need to navigate the narrow Minnesota Slip and the blue pedestrian lift bridge which was installed after the Irvin was moored back in 1986.  That pedestrian bridge was built and designed to allow passage of smaller vessels that are docked in the harbor next to the Irvin, the much-larger lake freighter was never meant to pass through that bridge.  With only about 7 inches of clearance on either side, it’s a tight squeeze to get the Irvin out without sustaining damage to the ship, the bridge, or the newly renovated channel seawall.

The William A. Irvin will need to pass through the narrow pedestrian footbridge, installed after the ship was placed in Minnesota Slip 30 years ago.

The 611-foot freighter sailed the Great Lakes from 1938 when she made her maiden voyage out of the American Ship Building Company in Lorain, Ohio.  She worked hard transporting iron ore around the Great Lakes until 1978 when she was retired.  She then sat in layup in West Duluth for 8 years, awaiting her fate, when the Duluth Entertainment Convention Center (DECC) purchased her and moored her where she currently rests in the Duluth Harbor, and turned her into a floating museum.  That was over 30 years ago and she hasn’t left her berth since.

Since then, growing concerns over industrially contaminated sediments and normal wear and tear damage on Irvin’s hull have prompted this move out of the harbor.  She won’t be going far, however.  Plans are to put the SS William A Irvin into dry dock at the Fraser Shipyard in Superior, Wisconsin, where her hull will be repaired and she will receive a new coat of paint.  Meanwhile, back at the Minnesota Slip, crews will be doing remediation of the contaminated sediments.  Once everything is complete and the harbor re-opens in the spring, the SS William A. Irvin will once again take her rightful place in the Duluth Harbor.

The ship will be moved, slowly, out of the harbor using two winches- one to pull and one to break.  The Irvin will move no faster than 1 foot every 4 seconds and is estimated to take 4-5 hours to get the ship out into open water.  This tricky maneuver will happen when the weather is just right.  Winds need to be under 5 mph and wave height no more than 6 inches.  This is why the move date has yet to be determined.  It will likely be a day-of decision as crews keep a close eye on the weather forecast.  Typically, the lake is at its calmest in the pre-dawn hours, which is why the move will likely happen at that time.  If you are lucky enough to be in the area when this starts, you may have the chance to witness this historic moment first hand.

The ship needs to be out by October 1st to allow the remediation crews time to do their job.  Wren Works LLC, the firm hired to coordinate and oversee the move, expects the move to take place in late August or early September.  Little else is known about the timing of the move, or if it will be announced.

If you miss this moment, keep an eye out for the announcement of the William A Irvin’s return in the spring when the process will repeat itself, only in reverse, and she will come home.

For North Shore visitors, this does mean some changes in the ship’s usual activities.  To prepare for the move the ship is already closed to visitors. The Haunted Ship, a Halloween time staple in Duluth, will be absent this year, as will the ship’s regular tours while she is in dry dock.  While we are sad to be missing out on one of our favorite North Shore hauntings this year, rest assured that the ship will be back and ready to go for the 2019 season.