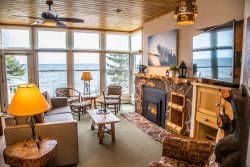 Tucked in a grove of trees near the edge of Beaver Bay, Minnesota, is an Old Chippewa Indian Cemetery where 22 people, including the legendary John Beargrease, were buried beginning in the year 1865.

Most don’t know the legend of John Beargrease and all he did for his surrounding community. Growing up a hunter, fisher, and trapper in Beaver Bay, Minnesota, was not easy, but their family made it work and soon became well known for their mail service. Since the train back then only made it as far as Agate Bay, and other channels of communication were limited, John and his brothers began to pick up the mail and deliver it up the North Shore while making their trips to hunt and trap.

Keeping loved ones and family members connected through his service, John continued delivering mail for over twenty years. During snowy months, his sled dogs pulled the mail-laden sled, and he then took to the Lake during the warmer months for an easier commute. He made his fastest dogsled trip from Agate Bay to Grand Marais with a load of about 700 pounds of mail in just under 28 hours. Because of his reliable and successful mail delivery, the population along the North Shore grew and the economy stabilized.

John made his last mail delivery on April 26, 1899, but continued his trading business for many more years to come. One day in 1910, John went out in a storm to rescue a mail carrier whose boat was caught in the waves off Tamarack Point near Grand Portage. This selfless act did not go unnoticed, but he soon caught pneumonia and eventually died in his hometown of Beaver Bay. His grave can be seen there today at the Indian Cemetery.

Getting There
Heading northwest on Highway 61 in Beaver Bay, turn left (or away from the lake) onto Old Town Road (next to Holiday) and follow the road until reaching the stop sign. On the left side of the road (just before the stop sign) look for two log railings and some steps (they may appear overgrown from the road). Follow the stairs/trail to the top of the small hill where you will see a historical marker that lists the names of the people buried there.