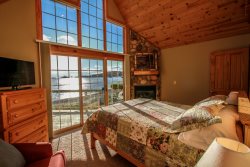 On November 28, 1905 the schooner-barge called the Madeira was making one of its routine trips on Lake Superior, under tow of the steamer William Edenborn, and found itself in the middle of a violent storm. Winds were blowing around 70 to 80 miles per hour with swells significantly larger than ships of the time could handle. The captain of the steamer that was towing the Madeira quickly realized he could not fight it and cut the Madeira loose.

Shortly after the Madeira had been cut loose, it crashed into the cliff named Gold Rock (pictured above). One of the crewmen was able to jump to safety, bringing along eight others of his crew. Two days later, the tugboat Edna G was able to rescue the remaining stranded crewmen and bring them to safety. Only one of the men aboard the ship went down with it. The brutal storm, which became known as the Mataafa Storm, damaged over twenty other vessels on Lake Superior over its duration. This ultimately led to the creation of the Split Rock Lighthouse to aide with traveling through these storms.
In 1955, divers first explored the wreck of the Madeira but found no treasure on board. A salvage company soon followed and were able to remove the anchors and the ship’s wheel, which was eventually sold to the Split Rock Trading Post. The anchor can be seen today outside the visitor center at Split Rock Lighthouse State Park. Despite all the dismantling of the ship, today the Madeira still lies at the bottom of the lake and is often investigated by divers from around the world. A special diver parking lot has even been provided for shore diving (located north of the Split Rock Lighthouse State Park main entrance on MN-61). Even if you’re not into diving, it’s worth driving to the parking lot. Sometimes on a sunny day, the wreck can be seen from the surrounding cliffs.