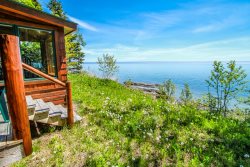 Who is Pierre the Voyageur and why is he so interesting? Well, imagine driving down the highway and seeing a 20 foot tall, mesh and fiberglass cartoon-like statue glaring down at you. This statue was placed on the Smithsonian’s list of historic landmarks and is something the people of Two Harbors are very honored to have near their city. Some say he resembles Paul Bunyan, but what makes him different are his slits for eyes, a slight grin, and no pants?

Pierre first stood in front of the Voyageur Motel in Two Harbors. It is said that long ago, Pierre’s eyes glowed a scary red and a motel employee sitting in a hidden booth operated his controls and even made him speak. The “no pants” feature comes from the historic appearance of voyageurs. According to an exhibit at the Fort Frances Museum and Cultural Center in Ontario, back in the day these voyageurs usually wore a long sleeved woolen skirt and a pair of deerskin leggings that ended just above the knees.

Today, Pierre stands proudly in front of a motel outside of Two Harbors, MN and has even been given a red paddle to hold. Spotlights give him a strong presence at night and his glowing red eyes make him especially scary during a bad snowstorm.