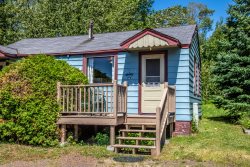 Snowy Owls, the largest of the North American owls, are beautiful, large white birds that call the North Shore home. Their white bodies and wings have varying amounts of brown or black markings on them, with females tending to have more. The white body helps camouflage the big bulky body of the owl in the winters. The Snowy Owl will travel great distances in search of prey and for breeding purposes. Unlike most owls, Snowy Owls are very active throughout the day and rely on their hearing to find prey.

Habitat
In winter, Snowy Owls tend to move toward shorelines of lakes and oceans, and agricultural fields in the northern United States and Canada. Every once in a while, an owl will fly to a northern city and draw big crowds. In the summer, Snowy Owls travel as far north as the Arctic Circle where the climate is milder and there is an abundance of prey. They will also breed throughout the summer in the treeless arctic tundra area, which will get up to 24 hours of daylight. They typically spend their days flying or sitting on or near the ground on places such as a fence post or a large boulder.

Reproduction
In early spring, male Snowy Owls mark their territory with a deep hooting noise and they fly around slowly beating their wings. He will locate a nesting female, who is usually sitting on a depression in the ground of the tundra. The female Snowy Owl will produce anywhere from 3-11 eggs, depending on the abundance of prey in that year. The eggs are whitish, and usually become nest-stained. The female will incubate the eggs for 31-33 days and the male will bring food to the female. The eggs hatch at intervals, allowing the female to feed young while incubating other eggs. The young are fed by the parents for up to at least 9-10 weeks and they begin flying around seven weeks.

Food
Snowy Owls hunt by day and perch up high to watch for prey on the ground. Once they spot prey, they swoop down and catch their dinner with their talons. If they are extra hungry, Snowy Owls will seek out prey by flying really low to the ground, using their eyes and ears to find dinner.  In the summer Snowy Owls are very nomadic and travel to find food. Their diet varies, but it usually includes small rodents called lemmings, along with rabbits, hares, voles, and ground squirrels. In coastal areas, Snowy Owls will feed on fish and other birds, such as geese and songbirds.

Spotting One
Biologists have not been able to track the exact travel routes of the Snowy Owl, but many spend their time on the North Shore during the winter. Keep your eyes open, and if you’re lucky you may spot one on your next North Shore adventure.