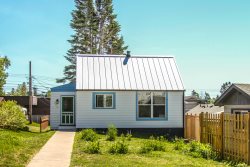 This little trail will allow you to stretch your legs and enjoy a stroll through the prettiest point in Two Harbors. Sonju Trail winds along the rocky coast of Lake Superior through tall trees and raspberry patches. It’s one of the local’s favorite spots to walk, and many don’t come to Two Harbors without taking a stroll through it.

Take a break throughout the journey on one of the many benches and watch the waves crash against the rocky coast. You may also leave the path and find the ancient lava flows that left their mark many years ago. It’s quite a sight to see! Either way, you will be rewarded with the sense of being out in the wilderness, when in reality you are only a stone's throw away from the town.

Keep an eye out for the many deer you may cross paths with, as many of them are not frightened by humans. This is a result of the countless times they have been fed by the guests staying at the bed and breakfast that is found next to the lighthouse. Other wildlife has been spotted along the trail, as well. If you’re lucky you might see a fox, rabbit, squirrel, and the rare black bear or moose passing through.

The threat of development continues to put pressure on the area and no one knows how long the trail will exist because of its close proximity to the town. Be sure to check out the Sonju Trail before it’s too late!

Getting There
In Two Harbors, turn right off Hwy 61 onto Waterfront Drive/6th Street. Follow the brown signs directing you to the breakwall at Agate Bay. Look to your left and find the arched passageway that marks the start of the trail.