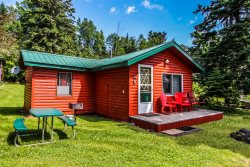 The Superior National Forest is a large (almost 4 million acres) forested area located in the Arrowhead region of northeast Minnesota. It is part of the United States Forest system and offers unlimited recreational activities year-round. The forest encompasses the greater Boundary Waters Canoe Area Wilderness (BWCAW) which is sandwiched between the Canada-United States border and the North Shore of Lake Superior.

Land (and Air)
Over 2,000 miles of trails are designated for recreational use such as hiking, hunting, fishing, birding, biking, horseback riding, cross-country skiing and snowmobile and ATV riding. Canoeing, biking and hiking are the most popular activities in the forest. Most biking trails are along gravel surfaced forest roads, but there are also two dedicated single-track areas: Britton Peak (Tofte) and Pincushion Mountain Trail System (Gunflint Trail outside of Grand Marais). Those who like to keep both feet on the ground enjoy taking advantage of the 400 miles of hiking trails within the park, ranging from easy to difficult.

Air
The park is home to many birds. Look into the air, especially during the spring or fall season, and you may spot one of the 318 different species of birds that are found within the park. Species include various raptors and 24 different types of warblers!

Rock
Some of the oldest rock on the surface of the earth is exposed in the forest. Granite from the Laurentian Shield formed more than 1.1 billion years ago and created the Sawtooth Mountains. Also found within the park are iron ore and fossil cyanobacteria mounds called stromatolites that were formed 2 billion years ago. The forest is home to the tallest natural peak in Minnesota, Eagle Mountain, which is 2,301 feet tall and offers spectacular views over the vast forest.

Water
The Superior National Forest’s most treasured resource is its lakes and water resources. Within the forest boundaries, there are over 445,000 acres of the world’s cleanest and clearest water resources. About one third of the forest lies within the Boundary Waters Canoe Area Wilderness (BWCAW) which includes over 1,500 miles of canoe routes, nearly 2,200 designated campsites, and more than 1,000 lakes and streams seemingly untouched since the glaciers melted. The lakes and rivers also offer an abundance of fish species including walleye, northern pike, smallmouth bass, and trout.

Trees
This northern forest thrives with its numerous pine, fir and spruce trees which are home to many wildlife species including moose, wolf, and black bear. The area is the last stronghold of the gray wolf in the lower 48 states with approximately 400 wolves that continue to roam within the boundaries. As the seasons progress, you will be treated to different images of the forest. The deep summer greens change to a spectacular reds and golds in the fall. Fall is then followed by the crisp white solitude of winter and broken by the sound of running water and icicles melting in the spring.