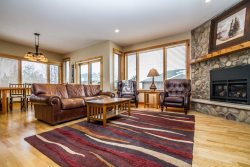 In the 1950's, a bustling little town sprung up along the shore of Lake Superior.  The tiny two-block town, built by the Erie Mining Company, housed the employees of the nearby taconite plant and their families.  22 pre-fabricated homes were brought in on trucks and lined either side of the street in this picturesque town.

The town was called Taconite Harbor, and from 1957 until 1990 it had its ups and downs.  In the beginning, the convenience of living near the plant was a big draw to many families.  To accommodate the growing community a fire hall, community center, playground, baseball field, basketball court, and tennis court were constructed.  The town’s close proximity to Lake Superior meant it was a town with a view and a desirable place to live. It was especially perfect for young families just starting out.

It was also an affordable place to live.  For just $400 down and $100 a month, families could comfortably live in the tidy three- and four-bedroom homes.  Each home came with a paved driveway and spacious tree-lined backyard.  In many ways, Taconite Harbor was the idealistic 1950's neighborhood with pastel-colored homes and a car in every driveway.   During its peak, close to 75 children called Taconite Harbor home, and in the evenings kids would run around playing games in the streets and the yards until the street lights turned on and it was time to go home for dinner. It was a postcard North Shore town.

The appeal of the town began to fade in the 1970's and 80's when the original families began to retire or chose to move away due to the growing issues of taconite dust and noise pollution from the plant.  In 1982 the taconite business took a hit and the workforce was reduced to only about 100 employees.  Most families left the area to find work elsewhere and Taconite Harbor started its descent into a ghost town.

In 1986 the remaining residents were told the town was no longer going to be supported and they would have to start moving.  Those residing in the homes were offered the chance to purchase them, for just $1, but were told they’d have to remove them from the land.  Many of the houses were moved into nearby Silver Bay and privately-owned plots along Highway 61.  In 1988 the final resident left, officially making Taconite Harbor a ghost town.

In 1990 the remaining homes and buildings were packed up and sent out on trucks.  All that remained of Taconite Harbor were the foundations, streets, street lights, and remnants of the vibrant community that it once was.

Less than 30 years later, nature has reclaimed most of the land.  You can still make out two of the main streets in town, and a rusted old street light still sits at the entrance to the town.  There are holes where the sewer system once was, and if you venture off the beaten path you can still find a foundation or two.  For the most part, however, Taconite Harbor has returned to nature, leaving only the memories of those who once called this place home.

Work continued at Taconite Harbor over the years, switching hands several times until Minnesota Power took over.  In 2016 Taconite Harbor Energy Center idled it’s coal-fired operations affecting the remaining 42 employees.  It currently runs on a skeleton crew of a few employees and is only operated occasionally.  It is expected to close for good by 2020.  Perhaps, another 30 years from then, the entire area will have been reclaimed by nature and all that will remain are the stories.

Taconite Harbor is now a safe harbor with a small outdoor museum that tells the story of how the harbor was built out.  If headed down that way you may miss the town, or what remains of it, entirely.  To the right, as you turn off Highway 61, a single street light still stands, marking the entrance.  Walk straight and you will walk down the main street.  There isn’t much to see anymore, but it’s a quiet and peaceful place.  Perhaps it's worth a quick stop and look around before heading out to other destinations along the shore.