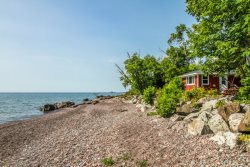 Peter Wolf Toth is a well-known American Sculptor known in Minnesota for his impressive statue built in Two Harbors. He built and erected this sculpture in 1977, but was drawn back to it when he heard it needed repair. Spending weeks camped out next to the statue, Peter was unpaid and basically unnoticed, but was determined to give the previous inhabitants back what he had once been so proud of.

The statue is part of a larger collection known as The Trail of Whispering Giants. The 71 statues that make up the collection are cataloged by the Smithsonian and can be found all over the US and in various Canadian Provinces. Although it is an ongoing project, Peter has been recognized all over the country for his incredible artistry. He always donates the sculptures to the community he makes it in, and never charges a fee for his time.

The statue itself in Two Harbors stands around 30 feet tall and is made of pine. It is located along Highway 61 near the Visitor Center in Two Harbors and has many picnic tables and open spaces nearby. There is also an original Civilian Conservation Corps cabin next to the statue that is filled with maps and brochures for visitors to enjoy.