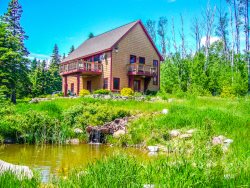 The wolf population on Lake Superior's North Shore is alive and well! The DNR population survey reported 439 packs and over 2,200 wolves living within Minnesota's wolf range, primarily in the northern half of the state. That survey also showed that the population of the grey wolf was growing, increasing from just 374 packs found during the previous survey.

This is a great recovery from a century ago when the wolf population dwindled to almost zero due to active hunting. It used to be that if you hunted a wolf and turned in a paw to the DNR, you'd get a payment for successfully hunting what was once considered a nuisance species. These days, wolf hunting is illegal and could carry steep fines or even jail time. Since the near extinction of the wolf population in Minnesota, researches have realized that wolves are an integral part of our ecosystem. Their presence keeps the deer population, as well as other species population, in check.  This, in turn, helps maintain other natural resources, like plants and shrubs, which are eaten by animals wolves prey on.

In very recent years, we've seen this fine balance between predator and prey relationship affecting flora and fauna on Isle Royale in Lake Superior. The wolf population had dwindled to just two wolves on the island, meanwhile, the moose population flourished due to lack of predators. The moose were destroying the limited natural resources on the island, so a multi-national program was set up between the US and Canada to increase the wolf population on Isle Royale. Since then, over a dozen wolves have helped to re-populate the island and are being closely studied by the US Parks Service.

Isle Royale is a great modern-day example of what could have happened in Minnesota had the wolf not become a protected species. Luckily, this was all figured out in time and the population has revived and is thriving.

If you’re looking to spot a wolf on the North Shore, there are a couple of things you should know. Encounters with wolves can occur throughout any time of the year, but the most frequent encounters happen during the late winter months. This happens for a couple of reasons, one being that the deep snow inland keeps the deer that they prey on near Lake Superior's shore. Another, and maybe the most important reason, is Lake Superior freezes over and enables the wolves to stalk their prey out onto the ice for an easier kill.

Wolves actually use the ice to their advantage when hunting deer, surrounding them along the shoreline and eventually forcing them out onto the ice. If not on the ice, many motorists on Highway 61 have spotted wolves late at night preying on the roadkill that was left behind. In recent years, there have been reports of a resident wolf in the Cascade Beach Road area of Lutsen.

If you're interested in seeing a wolf, be sure to be outside around dawn, as this is their most busy time of day. Then, walk down to a piece of Lake Superior shoreline that isn’t visible from Highway 61 and keep your eyes peeled. Make sure to bring a pair of binoculars because you will want to keep your distance. Also, dress warmly with plenty of layers, and if you’re not lucky enough to encounter a wolf, you’ll at least get to witness the beauty of a North Shore sunrise.

While wolves generally avoid populated areas and are not a nuisance to people, there have been reports of wolves attacking pets, such as cats and small dogs. Usually, this happens when there is a pack disturbance that causes a wolf, typically a male, to be kicked out of their pack. The lone wolf has a harder time hunting and catching more difficult prey, so they seek out easier prey, like domestic animals. It's always wise to keep an eye on your pets when they are outside and always be aware of your surroundings when hiking with your pet.  Wolf attacks on domestic animals are incredibly rare. There have been less than 30 reported wolf attacks in the entire United States ever. In Minnesota, the 2013 attack of a teenager by a wolf with a deformed jaw was the first, and so far only, wolf attack on record in Minnesota history. The teenager in that incident had only minor injuries.