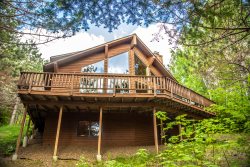 Clearwater Castle a vacation rental by owner on Clearwater Lake

If you have explored rivers and lakes along the North Shore you’ve probably noticed that the water is the color of root beer. Why? Well, most people think it’s caused by water containing large amounts of silt. However, the actual reason is that North Shore rivers, especially when the water is low, carry tannins from swamps and decaying vegetation that keeps its color an amber-brown.

Many other bodies of water around the world are also root beer colored. For example, our very own Lake Superior sometimes seems reddish-brown. This happens when strong winds or rains launch red clay particles and other sediments into the water. The sediments don’t cause any harm, although we imagine it does give spectators an uneasy feeling as they’re used to that cool-blue water that the lake is known for.