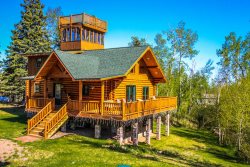 If you have ever driven up the North Shore on Highway 61, just past Two Harbors, you’ll likely recognize the scenic tunnel pictured above. However, you might not know its interesting history.

The 1,344 foot tunnel, which was built in the early 1990's, has dramatically changed the experience of driving on Highway 61. Prior to the 1920’s, drivers had to take a detour away from Lake Superior, adding many miles to their commute. After the 1920’s, a narrow two-lane road took drivers along the cliff’s edge which dropped into Lake Superior. On the route, drivers were always in danger of rocks and boulders tumbling down from the cliff walls overhead.

Since the tunnel was built right through the Silver Creek Cliff (the North Shore’s highest bluff that rises directly out of Lake Superior), it took over three years of dynamite blasting to remove the 500,000 cubic yards of rock and to construct the tunnel. It was completed in 1994.

If you wish to still see the views from the old road you can do so by parking in the parking lot on the east side of the tunnel and walk onto the old road grade which is now part of the Gitchi-Gami State Trail. The trail runs parallel to the road on the lake side of the cliff.