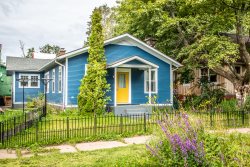 Just north of Two Harbors, across the street from the legendary Betty’s Pies (which we highly recommend) is a small, dark cobblestone beach named Kelsey Beach. The beach is made up of fascinating forms of stilled lava and parts of it are covered with small cobblestones. It is rumored that the beach has some sort of mystical power. Visitors often say that the beach is a sanctuary that fills them with peace and tranquility each time they visit.

Nearby, the Stewart River flows under a concrete arch bridge. The river is named after the settler, John Stewart, who used the river for log driving operations many years ago. Today, the river makes for a perfect spot to explore, relax or even take a dip.

Getting There
To get to the beach, drive about three miles northeast of Two Harbors. After crossing the Stewart River Bridge near Betty’s Pies, turn right immediately. A short path from the parking lot will lead you to the beach.