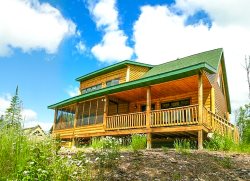 There is little information available about the original native residents of Chippewa, a town that used to stand just east of Grand Marais. All that is left to hint at what life was like back when the town was alive are letters and photographs taken by European Settlers who made observations of the area. The only building that remains and serves as a stark reminder of what was once there, is the St. Francis Xavier Church.

Listed on the National Registry of Historic Places, this church was built under the direction of Father Specht in 1895 on land donated by Antoine and Antoinette Fillison. The community raised money by hand weaving baskets, filing them with baked goods, and selling them to fellow community members. Often times lumberjacks were the high bidders!

The church served as the only Catholic Church in Grand Marais from 1895-1916 until the opening of St. Johns. As the population of Chippewa City began to decline, so did the attendance and use of the church. It held its final mass on Christmas in 1936. To this day, the church stands tall and is the only physical remnant of what used to be a vibrant community. To visit, call the museum at (218) 387-2883 and ask about opportunities.

Getting There
One-half mile north of Grand Marais, look for the Chippewa City church's brown historical marker and you’ll see an old white church on your right.